Whether media relations, global meetings, events, conferences or campaigns – ACN’s actions and public relations work in 2019 were once again highly diverse. Here we present some of the events organised by the ACN headquarters or some of its 23 national offices.

On 15 August, during the Angelus prayer in St Peter’s Square, Pope Francis blessed 6,000 rosaries as a gift to the faithful in Syria. “The rosaries, made at the initiative of ACN, are a sign of my closeness to our brothers and sisters in Syria,” said the Pope. Earlier he received a delegation from ACN and praised the work of our charity: “I thank ACN for everything you do. When we pray with the people in Syria, we come close to them.” On 15 September the Pope also blessed an icon with the motif of “Our Lady of Sorrows, Consoler of Syrians”.

Comfort for mourners in Syria

In 2019, ACN launched a campaign entitled “Comfort my People” to provide spiritual support to the bereaved families of war, murder and abduction victims. The project was organised and implemented together with the local Catholic and Orthodox Churches and was intended as a sign of brotherhood between the various Christian denominations. The relatives of the victims received a rosary blessed by the Pope, a Bible or a cross as a gift. In addition, the icon of “Our Lady of Sorrows, Consoler of Syrians”, also blessed by the Pope, was brought to Catholic and Orthodox parishes to give comfort to the faithful there. ACN called on believers around the world to be close to the mourners in Syria through prayer and solidarity.

“Night of the Witnesses”

For the eleventh time in 2019, ACN’s French national office organised the “Night of the Witnesses” (La Nuit des Témoins). The evening events are designed to commemorate the victims of religious persecution through prayers and the personal testimonies of those affected. The main event, which was repeated in other “Night of the Witnesses” French cities throughout the year, was held for what was foreseeable the last time in March 2019 in the Notre-Dame Cathedral of Paris, which was severely damaged in a fire only a few days later. Guests of honour in 2019 included Archbishop Fridolin Ambongo Besungu from the Democratic Republic of Congo, a country where violence has been rife for decades, Bishop Theodore Mascarenhas from India, where fanatical Hindu extremists are increasingly attacking other religious communities, and Sister Mona Aldhem from Syria. Meanwhile, the “Night of the Witnesses” is also held in other countries where ACN is present, including in Germany, Spain and Italy. 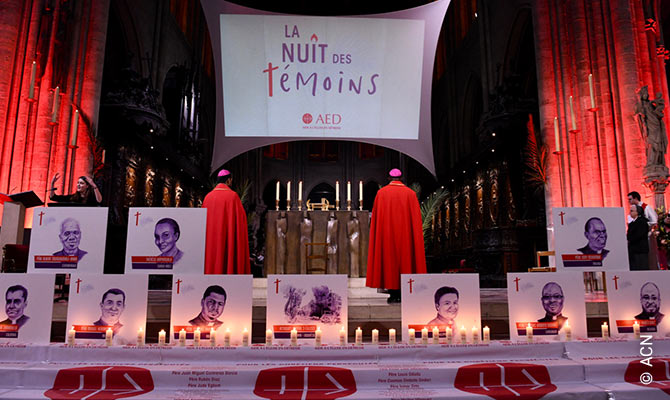 As in previous years, churches, cathedrals and symbolic public buildings were again illuminated red in 2019 to commemorate the victims of religious persecution worldwide. This time the initiative launched by ACN took place in fifteen countries on four continents. The record was set in the Philippines where in addition to Manila Cathedral, 2,050 parish churches were illuminated in 68 dioceses. In the United Kingdom, 120 buildings were illuminated red. “Red Wednesday” was also celebrated in Washington, Prague, Lisbon, London, Frankfurt, Berlin, Rome, Vienna, Amsterdam, in several places in Canada and Australia, and for the first time ever in Budapest. The monuments and churches were bathed in deep red light, becoming a sign of solidarity for
persecuted Christians all over the world.

The World Youth Day in Panama City in January 2019 was the major event of the year for more than 122,000 young people from 155 countries. The highlight of the event: The meeting of the faithful with Pope Francis in several worship services. ACN enabled youth from the Holy Land, Haiti, Malawi, Bangladesh, Egypt and Albania to participate in World Youth Day. Through a sum of 100,000 euros, we were also able to support the production of rosaries that were made by Christians in Bethlehem and distributed to World Youth Day participants at the request of the Pope. The prayer beads are much more than just an aid for pilgrims’ personal prayers, as two hundred Christian families in the Holy Land were also able to live on this major order for one year. Prisoners, refugees and the unemployed were also involved in the production of the rosaries and were able to benefit from the initiative.

Aid granted by type of help
Previous
Next

What does the Pope’s visit mean to you?
The papal visit will lift up our spirits and morale more than anything else. All the eyes of the world will be on Baghdeda. And in this way the world will know what happened to this city. The terrible destruction and the forcible ethnic cleansing. It will also be a good thing if afterwards we get more support and help. This visit is really important to us, to those of us who are living here, especially after the massive ethnic cleansing and expulsion of so many of us. His visit means that we are not alone and that there are people who are praying for us. This will give us fresh hope and encourage us to persevere, here on our own soil, and not leave it.

What would you like to say to the Holy Father?
If I get the opportunity to meet him, I would like to be able to thank him for his visit, which has made us very happy, and for his prayers. I would also like to thank him for all he has done to help us in recent times. I have not forgotten his great gesture of solidarity in auctioning the Lamborghini in order to use the money to help pay for the reconstruction of our homes on the Niniveh plains. I would also like to ask him to continue praying for us and for peace to return to Iraq.

What would you like to show him in Qaraqosh/ Baghdeda? Which places should he visit?
I would like to show him our historic Al-Tahira church, and some photos of Baghdeda. I’d like him to be able to see how it was destroyed by IS and how the people here have worked so hard recently to rebuild it once more.

What does the visit mean to you?
The papal visit is the thing we have longed for most of all here. It will be a great blessing. We have a great yearning to see him. What gives added importance to this visit is the so very vulnerable situation that we are suffering as Christians in Iraq. There are many reasons for this vulnerability, including the aftermath of what IS left behind, the enormous destruction which has led in such large measure to the emigration of the Christians. There are many problems weighing on us. But when he comes to visit us, he will give us new hope and confidence and some relief from this burden. In addition there is the fact that the security situation in Iraq, and especially the political situation, is so unstable, so we are hoping that when the Pope does arrive they will guarantee his security in the way that they should.

What would you like to say to the Holy Father?
I would like to ask him to give me his blessing, to bless my ministry and the hard work of all the priests here, and also to bless all the people through his prayers. I would ask him to help all those in danger in this country, whether they are Christians or Muslims. And that he might strive to encourage the countries of the world to support this nation, which is truly in need.

What would you like to show him in Qaraqosh/ Baghdeda? What places ought he to visit?
I would love him to visit the Al-Tahira church, because it is a symbol and a rich cultural legacy of Baghdeda. This church is the mother, the home and the inheritance of every one of the inhabitants of Baghdeda. Our forefathers built this church, and we all feel we are a part of it. Of course, we would be happy for him to visit many different places – churches, monasteries and traditional homes – and also for him to be able to meet all the many people who are longing to see him.

What does this visit mean to you?
This visit has a moral value rather than an economic one. This is a topic that will engage public opinion around the world and especially in Iraq. I feel as though I have an important part to play in it.

What would you like to say to the Holy Father?

It would be wonderful to be able to meet him, and I would like to be able to say to him, “We need international protection, because our Christian community was forcibly displaced.”

What would you like to show him in Qaraqosh/ Baghdeda? What places should he visit?
I would like to be able to show him the churches and houses that were burnt out, so that he could see the destruction left behind by IS in this city. And also our Baghdeda Heritage Museum, so that we can show him our history and culture.